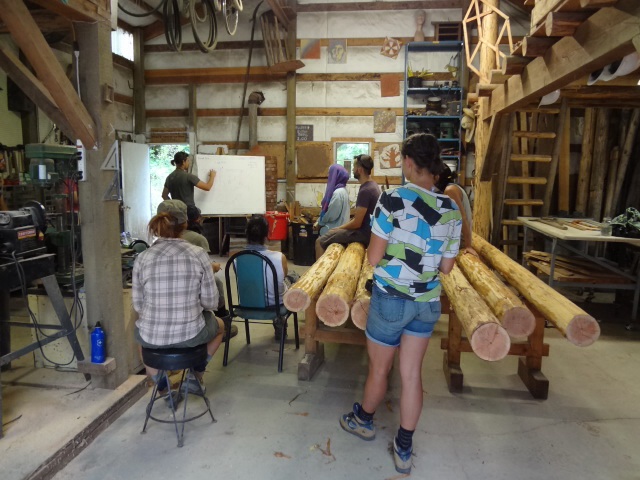 Intro to layout on round poles. The round poles will be the roof rafters.

We used round poles harvested on campus for the roof rafters. We flattened one surface of the poles, on which the roof will lie, and then scribed (traced) two cuts on the opposite sides for the rafter to attach snugly to the timber frame beams.

To do that, we first laid out vertical and horizontal coordinate lines on the ends of the poles. We measured 1/4″ down from the vertical point and drew a level line there. We snapped these lines with chalk along the length of the pole. (We found that snapping the string in the same plane as the drawn line resulted in a more level surface than snapping the string perpendicular. This is because any bumps and valleys in the pole will distort the string when it is snapped perpendicularly.) We then measured 5.5″ down from the 1/4″ line and snapped that line also. This line defines what the depth will be of the joint with the timber beam. 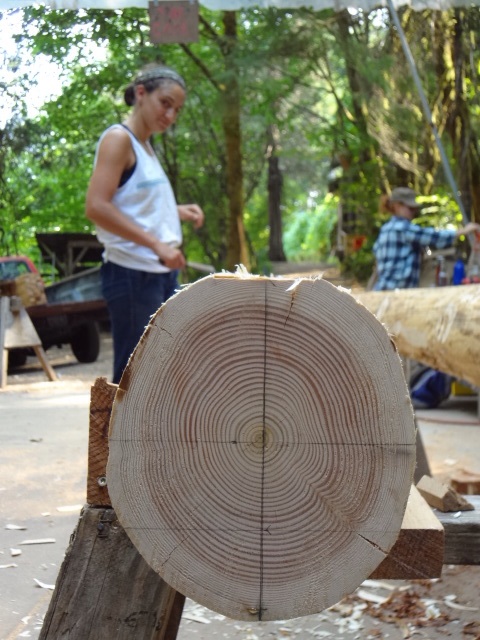 Vertical and horizontal coordinate lines, and two horizontal layout lines, at 1/4″ depth and 5.5″ below the 1/4″ line.

Using hand saws and chisels we removed the top 1/4″ from the poles. 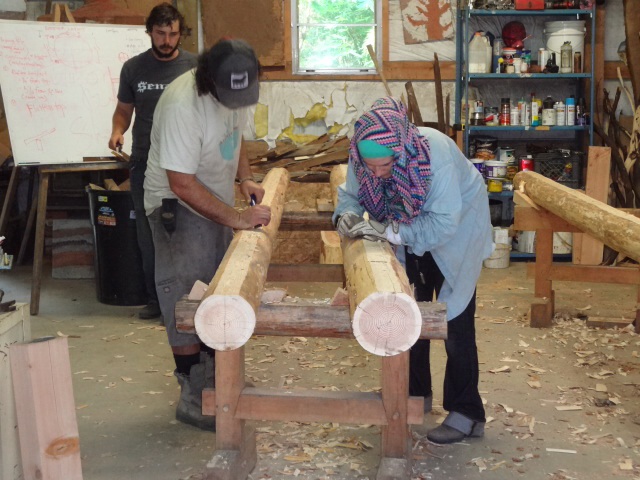 Creating a level flat surface on one side of the poles. The roof will be placed on this surface. 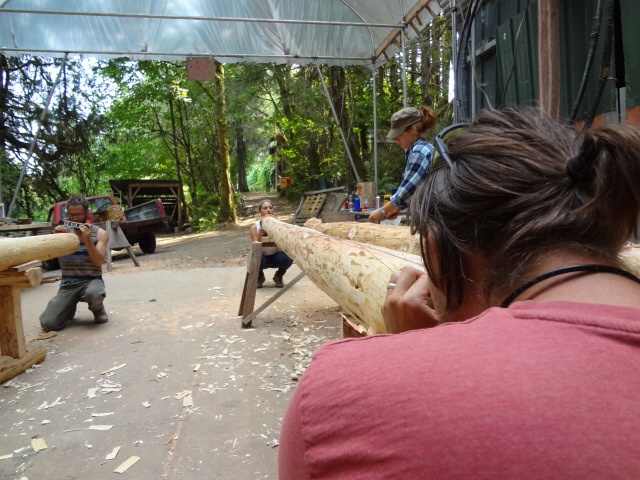 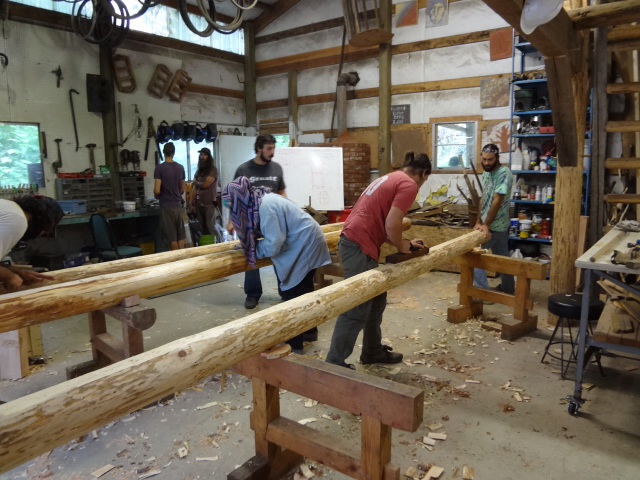 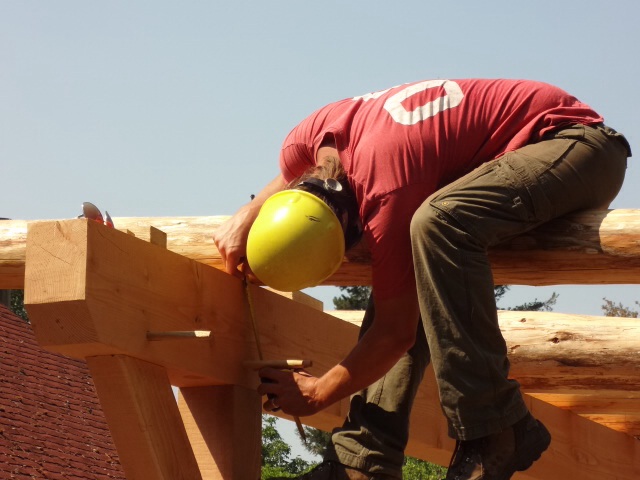 Scribing on round poles: measuring

Then we took a level block of wood of that same height (say, 1″) and placed it on the beam, parallel to the pole. We drew a line on the pole, tracing across the top of the wooden block. 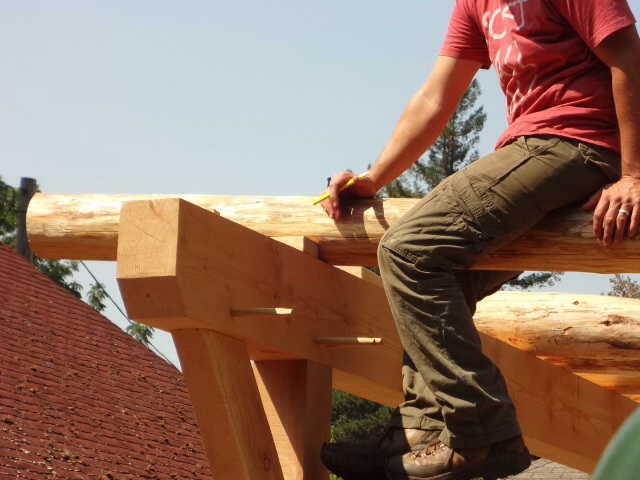 Then we traced the width of the cut along the inner and outer edges of where the pole overlaps the beam. 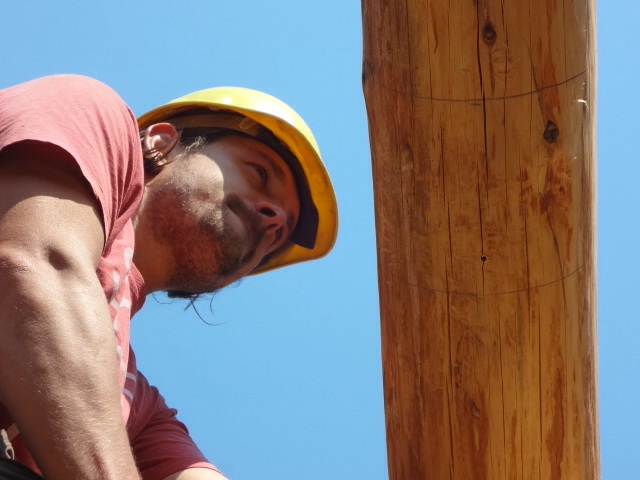 These are the scribed lines which will be cut to create the joint with the beam.

Then we cut out the traced area with hand saws and chisels. 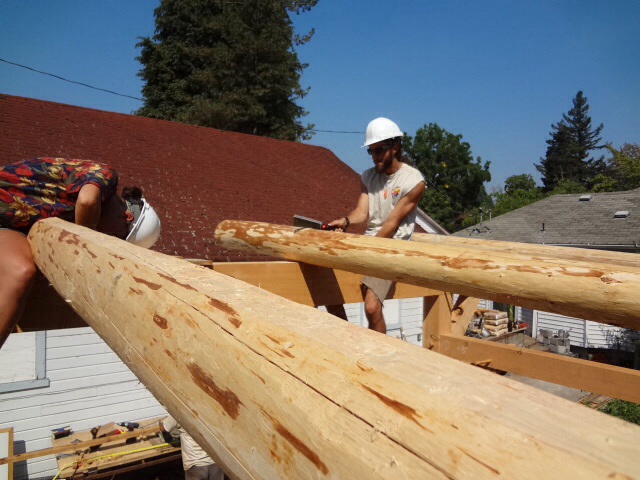 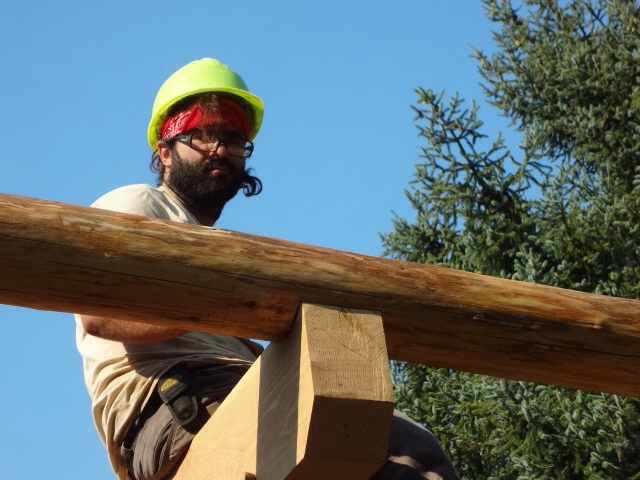 After the scribed lines are cut, Justin and the rafter sit nicely on the beam. 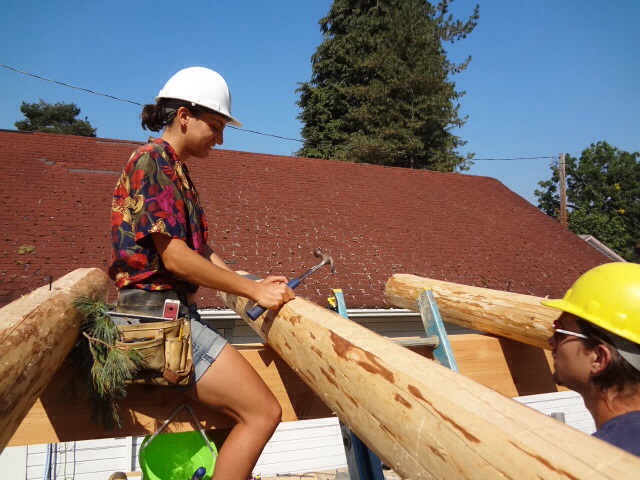 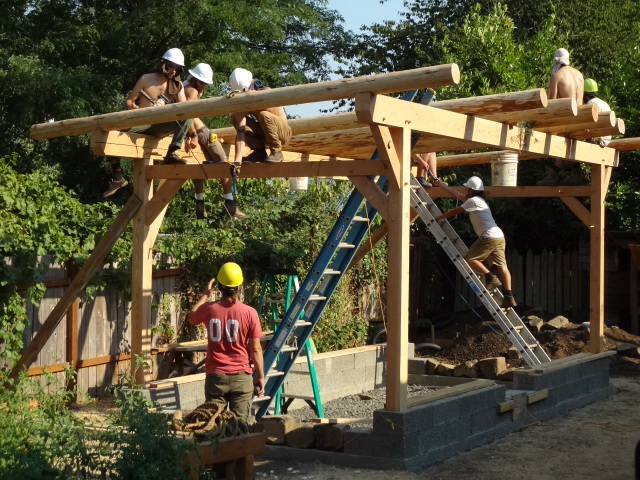 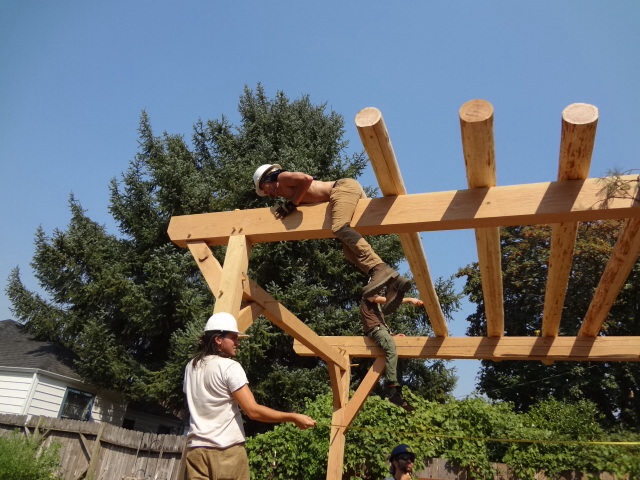 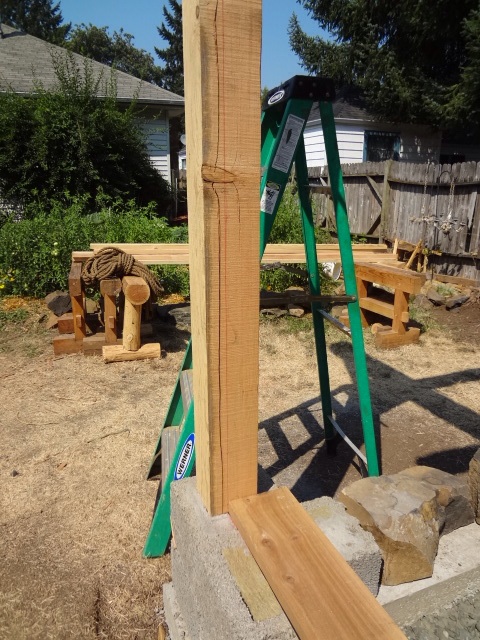 Bottom plate is flush with inner face of Faswall 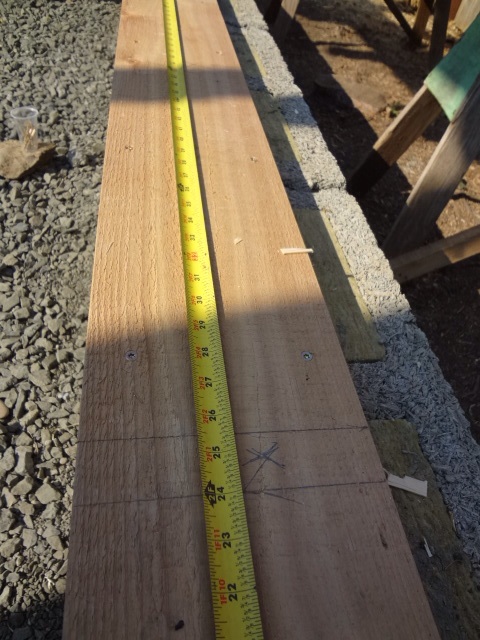 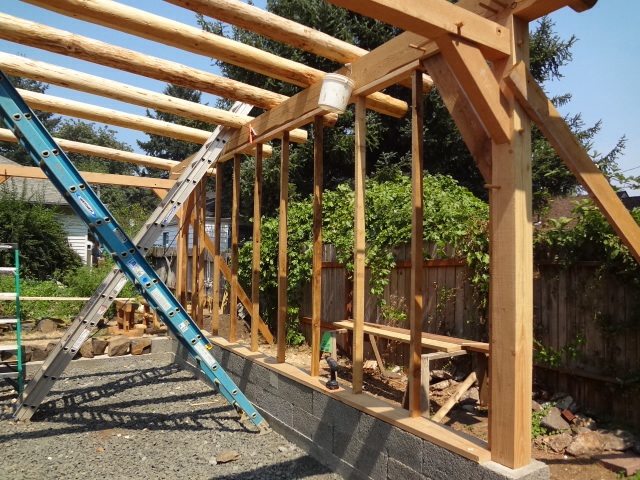 Outer row of wall studs in place. An inner row of studs was added next with small horizontal connecting pieces forming a “ladder truss” system. 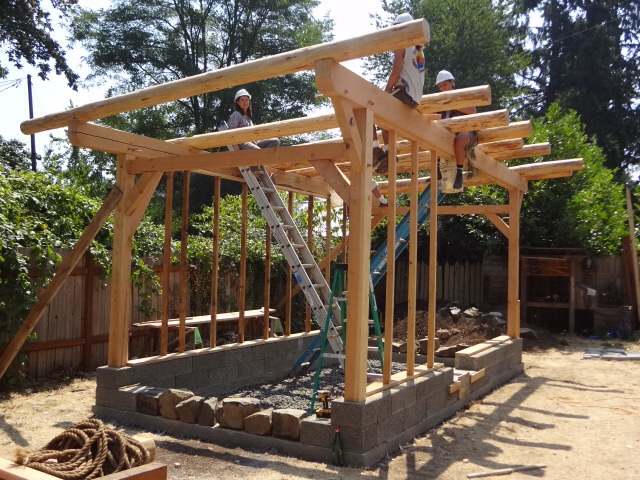 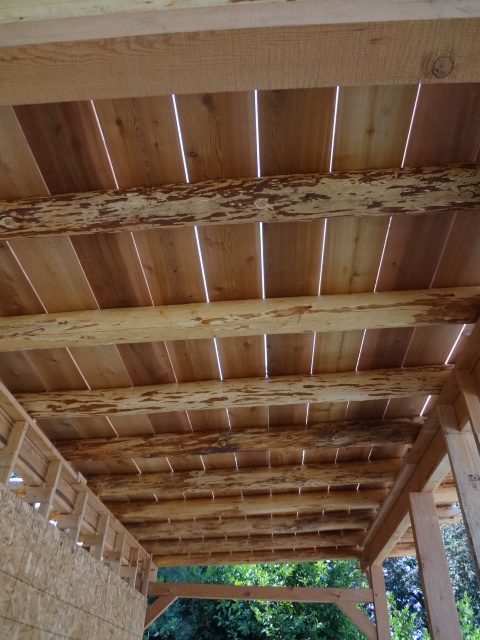 Roof sheathing – cedar boards (1×10?) nailed to the rafters. Within several days of being on the roof in the sun, the boards dried and shrunk, revealing small spaces between them. 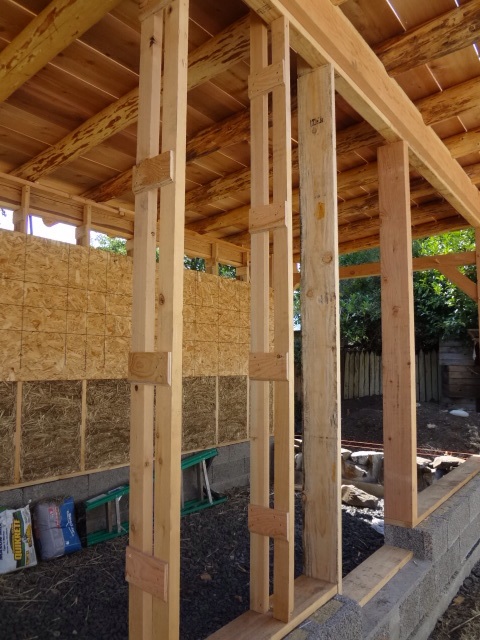 Ladder trusses. The first horizontal connector was 1′ above the bottom plate. The following ones were spaced 2′ apart. You can also see the back wall infill is beginning (light clay straw).

In this last photo, you can also see that we added one additional post for support on the front wall, to the right of the door opening. That right side of the front wall will be almost all glass.